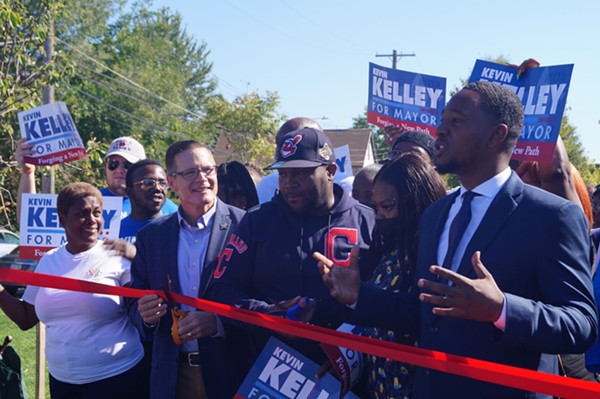 Jones also ran for mayor this year, placing fifth in the primary election earlier this month. He often clashed with Kelley during the summer campaign, accusing Kelley of being an obstacle to advancing on city council. But on Wednesday morning, at an event that also served as the grand opening for a new community park in Ward 7, Jones said that while he may not agree with Kelley on a number of questions, he respected the fact that Kelley was “a man of his word,” and who was “brave enough to stand up for what he believes in.”

Jones said the mayoral election was about three Rs: rebirth, results and resources. Under a Kelley administration, he argued, Cleveland neighborhoods would see continued investment of the kind he and Kelley had cooperated to secure in Ward 7, things like the new Cleveland Foundation headquarters and $ 15 million. dollars in park and recreation spending.

He described a professional relationship in which he, as a bushy-tailed first-year city councilor, frequently brought big plans and bold ideas to Kelley, who, through his wisdom and experience, was able to turn those ideas into actions, all for the benefit of the residents of the Hough, St. Clair-Superior and Asiatown neighborhoods that Jones represents.

The approval, which Kelley described as a “great moment,” was met with ambivalence, if not disappointment, by many former Jones supporters and other election observers. Jones regularly lined up with Justin Bibb in the primary. Both were young leaders who explicitly challenged the status quo. Jones has frequently and eloquently called out the entrenched interests that ruled Cleveland and, in his view, has refused to pass the torch to the next generation of rulers.

“You won’t catch me attacking Bibb,” Jones said at an early West Side Mayor’s Forum. “He and I have the same mission to make this city better, even though we drive different cars.”

Jones’ language was drastically different on Wednesday. He did not refer to Bibb by name, but said he and other constituents in Ward 7 “would not be fooled” by candidates with limited experience. “We have no idea who they are or where they come from,” he said, referring to Bibb, who has never held office.

Jones also introduced the idea that he shouldn’t be expected to endorse the black candidate in the race just because he, too, was black.

â€œThis race is beyond the race,â€ Jones said more than once. He even invited the crowd of supporters to repeat the mantra after him. “We know that a person can be like you and still be your own worst enemy.”

The remarks seemed to represent a drastic change in tone and allegiance, but when asked questions directly about that perception, he replied that the only reason the media would have expected him to line up was on Bibb is that they were both black. Norm Edwards, the president of the Black Contractors Group aligned with Kelley, shouted “This has to stop!” while Jones accused the media of laziness to applause. Jones stressed that he approved of Kelley only after he thoroughly investigated the two candidates and sided with Kelley’s experience.

“If you know me,” he said, “you know I don’t stand for anything that I don’t believe in.”

Kelley said he was desperately trying to run for as many voters as possible before the November general and thanked Jones for his support, celebrating his “tireless advocacy” to city council. While Jones is often described as a strong orator, Kelley has said Jones is as much a man of action as he is a man of his word.

â€œThis endorsement means the world to me,â€ he said.

***
Sign up for Scene’s weekly newsletters to get the latest Cleveland news, things to do and places to eat straight to your inbox.