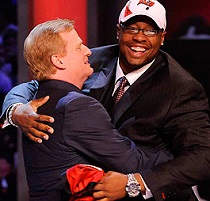 Imagine how much easier the Bucs’ pending free agency decisions would be if the NFL simply changed its offseason schedule.

Joe thinks the thinking man would agree that the NFL Draft should happen before free agency opens. But this is not the case.

Having the draft first, say the last week of March, would allow teams to get their hands on rookies sooner and also let them know their exact free agency needs. The draft is more unpredictable than free will, so let that play out first. Also, rookies need more time with the team than veteran free agents. The few extra weeks for beginners can make a big difference in their adaptation.

Imagine if the draft came first this season and the board fell to the Bucs with a steal of a first-round rusher and, say, a defensive tackle they were aiming for in the second round. The Bucs’ free agent priorities would certainly become clear in a hurry. Or suppose the draft drops to Tampa Bay with a guard they liked in the first round followed by a men’s coverage cornerback in the second round, then that would be a totally different approach to the Bucs’ free agency.

Joe thinks this league-wide change would trigger more furious bidding in free agency as teams feel more desperate. They couldn’t say, ‘Well, if we don’t get him, we’ll replace him in the draft.’ It would certainly make free will even more interesting.

Bucs general manager Jason Licht has before him what looks like a crazy list of complicated decisions and if-then scenarios as we sit here 10 days away from the free agency siren on Monday, March 14 at midday.

All of these Licht options got Joe thinking today about Joe’s old wish to have the draft before free agency.